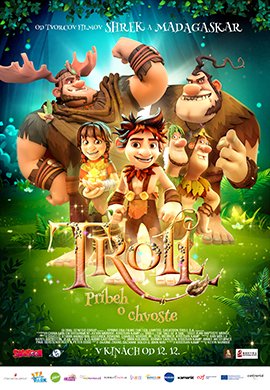 From the animators & designers of SHREK and MADAGASCAR comes an adventure of a different size.

SYNOPSIS:
The troll prince Trym has only two days to save his father, King Grom, who has turned to stone and had his tail stolen by the human Troll Hunter. Like Frodo in The Lord of the Rings, Trym and his companions must go on a wild and dangerous journey across the troll kingdom of Ervod and adventure into the human world to retrieve Grom’s tail, save his father’s life and return the kingdom to its rightful ruler.

STORY:
Troll, the Tale of a Tail, centers its story on Trym, a young impetuous troll prince of the hidden Troll Kingdom of Ervod. Trym tries to follow in the footsteps of his wildly popular father King Grom, but only succeeds in falling short of his own expectations as everyone tells him he is not ready to be King. Trym worships Grom, who is not only loved by Trym’s mother, Queen Guld, but by all of Ervod. He is bold, athletic, and fearless, all leadership qualities Trym aspires to one day obtain. The only trolls who don’t like King Grom are Grom’s evil cousin Grimmer and Grimmer’s mother, Sheriff. Sheriff is devious and will do anything to have her son take Grom’s crown and become King of Ervod.

During the annual race for the crown and kingdom of Ervod, Grom falls for a trap set by Grimmer. Trym feels responsible because his father’s attention was on Trym and not on the race as it should have been. Before Grom turns to stone, his tail is snatched by the human TrollHunter.

Now the once idyllic troll valley becomes a miserable tyranny with Grimmer as King. According to an ancient prophecy, Trym is the only one who can save the kingdom and bring his father back to life, and yet he only has two days to do it! With Freia, a feisty troll girl, and the two-headed eccentric Jutul, Trym must risk his life and the eternal peace of the kingdom with an epic journey into the human world to retrieve his father’s tail, conquer Grimmer and his army, and return King Grom back to his throne.