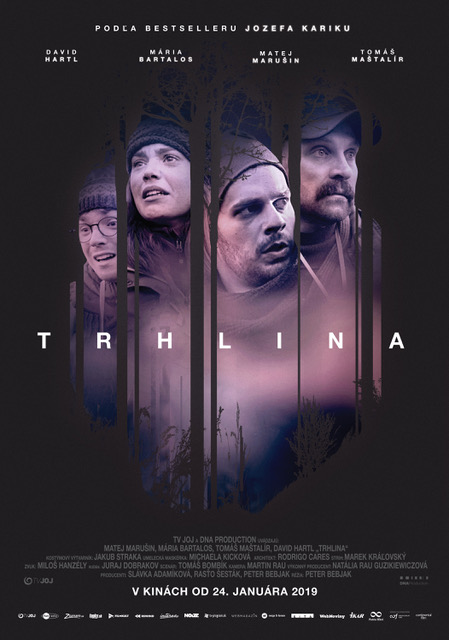 ERY, THRILLER, BASED ON ACTUAL EVENTS

The Rift / Trhlina has set a new record for a Slovak film opening in Slovakia, with 83,266 admissions and 494,386 EUR gross. The film was released on 24 January 2019. https://www.filmneweurope.com/news/slovakia-news/item/117536-the-rift-sets-opening-record-for-slovak-film

The adaptation of the eponymous novel by successful Slovak writer Jozef Karika follows a group of four people who go on an expedition to the mysterious woods of the Tribeč Mountains where, it is said, people have been disappearing for decades.

SYNOPSIS: Igor, an unemployed university graduate, discovers the psychiatric assessment reports of Walter Fischer. One day seventy years ago, Fischer disappeared under mysterious circumstances while walking in the Tribec mountains. Two months later, he reappeared under equally mysterious circumstances and had strange wounds and burns all over his body. He was disoriented, could not explain what had happened to him and never recovered. Igor continues his investigation and, to his astonishment, he learns that Fischer’s case was not at all isolated – mentions of mysterious disappearances in the mountains date far back into history. More and more chilling stories keep piling up. Igor, his girlfriend Mia, the conspiracy theorist Andrej and the inveterate sceptic David begin to dig deeper into the mystery and unearth a truth more terrifying than any fantasy. They embark on an expedition to the forests of Tribec, where they witness something that defies human understanding. Their initially innocent quest ends in tragedy. This mystery, as the group find out, has incredibly sharp teeth.